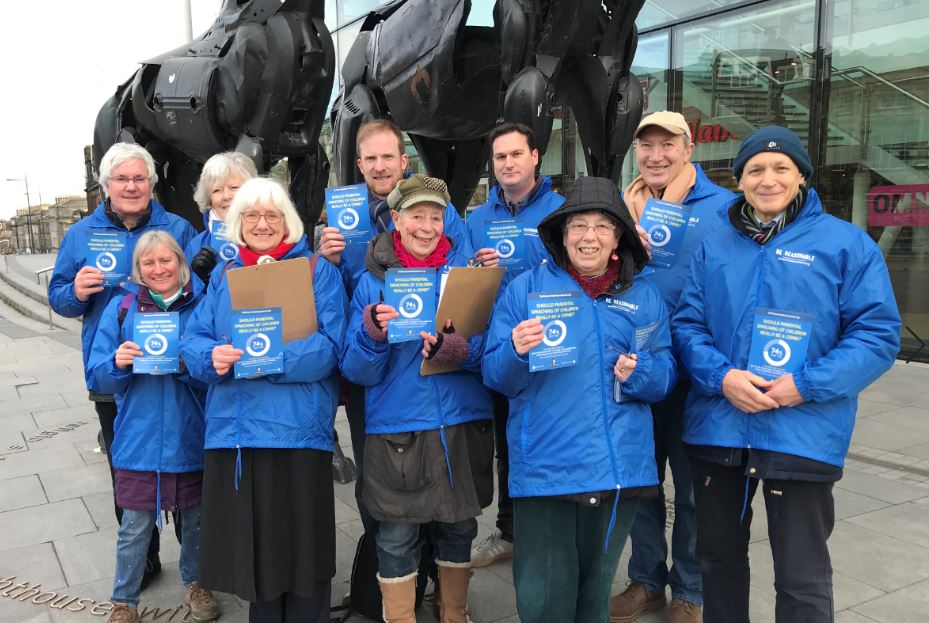 Edinburgh was the venue for the latest Be Reasonable Scotland Action Day and the team certainly got a range of views from the public. However, the vast majority of those views won’t be welcome to John Finnie – or the Scottish government.

As the team were gathering and putting on their Be Reasonable Scotland anoraks, one passer-by asked them what they were doing. When it was explained to her, she said “I was smacked as a child and it never did me any harm.”

We told her about the Be Reasonable Scotland Facebook page, which she promised to go on and tell her friends about. Here are some of the other memorable quotes from Edinburgh shoppers:

“I worry what the lack of discipline is doing to children.”

“The authority of parents and teachers is being eroded through interference by the state.”

“A ban on smacking would damage the parent/child relationship – what about false accusations? – it would be a major trauma.”

“I’m worried about this ban messing up children who see no one in control and so lack a safe place with boundaries that are solid and protective.”

“It’s the job of parents and teachers to prepare children for life. Discipline, responsibility and accountability are needed in this. If not, there will be a loss of respect and inability to teach and offer wisdom effectively.”

Two teachers were supportive of parental choice (including smacking) in setting boundaries of acceptable behaviour for children. Both teachers spoke of the overall deterioration in pupil behaviour at school, and attributed this partly to the lack of basic discipline at home.

One of our volunteers said that three quarters of conversations he had favoured the option of allowing reasonable chastisement by parents. Even more people questioned the ability of lawmakers to police the issue of smacking in homes.

He added: “The over-riding impression however was of public disengagement – a lack of public interest. If the Scottish Government’s ten years of talking about public and community engagement has had any effect, it was not apparent. Only one person out of some 200+ offers of leaflets was aware of the current call for views on the issue.”

That’s why Be Reasonable Scotland has been doing all it can to highlight the call for views, which ends on Friday 25th January – you can find help in responding to it here. Do let your friends know about it on social media. Please do take time to engage – it’s so important to let our elected politicians know what the public thinks on this issue, as it’s the public who will be affected by any change in the law.

A huge thank you to the intrepid team of local volunteers who helped us on Saturday – well done! The Be Reasonable Scotland Roadshow’s next stop will be the Dean Park Hotel in Kirkcaldy on Thursday this week at 7.30pm. If you live in the area, we hope to see you there!