John Finnie and friends claim ‘most people want a smacking ban’, but that’s not the whole picture

Smacking ban supporters like to claim that most people agree with them that smacking should be outlawed. They cite favourable polling numbers and positive soundbites.

But this is far from the reality we know. Poll after poll has shown that parents are against these plans and comments and responses suggest most people oppose the Bill.

So which is it?

John Finnie MSP gave a helpful answer when he appeared before the Equalities and Human Rights Committee to give evidence on his Bill last month. 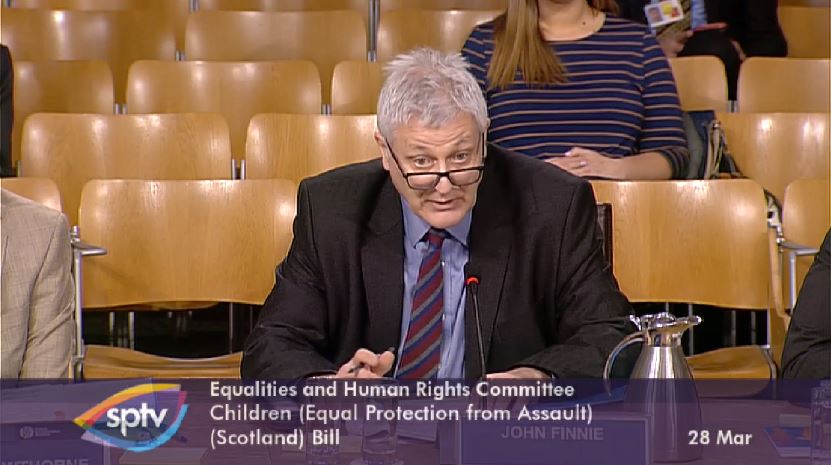 “How the question is asked matters. If people are asked whether children should have the same protection from assault as adults have, the overwhelming majority say that they should. That is about the framing.”

The problem with framing the question is you only get a snap shot. It’s not the whole picture.

Mr Finnie and his friends try to frame the question around ‘should children have the same protection from assault as adults?’

But there is so much wrong with this framing.

1. It conflates assault with smacking

Any ordinary person would never imagine describing an occasional mild smack by a loving parent as “assault”. How patronising and insulting to the millions of hardworking parents doing their best to bring up their children.
Would people answering this question really know it was about outlawing reasonable parental smacking?
We doubt it very much.

2. It neglects to mention parents

Parents are arguably the people who could be impacted the most if Finnie’s smacking ban Bill is passed. They could be criminalised for doing something which has been a normal parenting technique for generations. Yet nowhere in Finnie’s framing of the question are parents mentioned. Parents have primary responsibility for their children, not politicians. Article 8 of the European Convention on Human Rights states: “Everyone has the right to respect for his private and family life”. The state should not interfere unless there are exceptional circumstances. The parent-child relationship is unique and the ‘reasonable chastisement defence’ rightly recognises this. Yet John Finnie’s framing of the question does not mention or even acknowledge parents.
His proposal would remove the reasonable chastisement defence which can only be used by parents. So is he saying children need protecting from their parents? Is he saying parents using mild physical discipline such as a light tap on the back of the legs is assault?

3. It sounds like children are not protected from abuse

Asking if children should have the same protection from assault as adults makes it sound like children are currently not protected from abuse. But this is highly misleading. Violence, assault, abuse are all already illegal. The law specifically outlaws blows to the head, shaking, or the use of an implement.
Police and social work already have existing powers to deal with assault. One police officer with 10 years’ experience working in child protection said in a response to the recent Scottish Parliament call for evidence that he and his colleagues have never lacked powers to deal with child abuse. The submission went on to say that there was no appetite amongst colleagues for a change in the law. Police Scotland in its submission said that outlawing smacking would have resource implications. This would put further strain on already overstretched services and put vulnerable children in even greater danger.

4. It treats children and adults the same

Children and adults are not the same. The law already recognises this in many ways. Children can’t drive or drink alcohol. Children are treated differently in the criminal justice system. Children and adults are not the same. John Finnie’s smacking ban Bill will not affect strangers, but it would have a direct impact on parents and their children. Parents do many things for their children that they would never do for another adult. Parents teach children to walk, talk and go to the toilet. Parents teach children right and wrong and an occasional smack has been part of normal parenting for generations.

Michael Sheridan, of the Scottish Law Agents Society, in his submission to the Committee wrote: “children require treatment which is very different to that required by adults and the Bill appears to me therefore to be based entirely upon a false premise.”

5. Finnie’s framing of the question is misleading

When people find out what the Bill is really about they oppose it.

When people see the whole picture and realise that the proposal would make mild reasonable parental smacking a criminal offence, they oppose it.

Even if John Finnie says his intention is not to criminalise parents, the reality is, if the Bill is passed in its current form parents will be criminalised.

Legal experts have confirmed this in submissions to the Committee.

Mr Sheridan said that under the proposed legislation, a parent could “be guilty of assault, even if acting reasonably”. He added that prosecutions for smacking must follow as a matter of course, otherwise the change to the law would be “meaningless”.

Pamela Ferguson, Dundee University’s professor of Scots Law, said in her submission that Finnie’s Bill would “criminalise actions or behaviours which are currently lawful, such as smacking”.

New Zealand criminalised smacking in 2007 and at the time politicians promised parents would not be criminalised. But ten years later, a leading public law specialist Chen Palmer carried out an analysis of the law and concluded that parents have been criminalised.

When you look at the whole picture anyone can see that the smacking ban Bill would be bad for children, bad for families and bad for Scotland.