Why MSPs must dump the smacking ban proposal

By Simon Calvert, Be Reasonable Scotland
Published in The Herald, Wednesday 20 March 2019 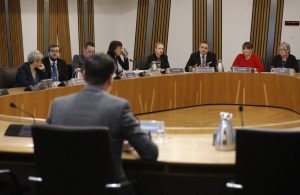 CRIMINOLOGIST Dr Stuart Waiton garnered headlines when he blasted MSPs on Holyrood’s Equality and Human Rights Committee (EHRiC) as “patronising”, “out-of-touch elites” who appear to be “living on another planet”.

It’s fair to say Dr Waiton isn’t a fan of Green MSP John Finnie’s bid to remove the defence of reasonable chastisement to make mild parental smacking a criminal offence. Frustratingly, recent developments have only served to underline his scathing critique of our political elites.

Analysis of the recent EHRiC call for evidence on smacking shows overwhelming opposition to a ban, as endorsed by Be Reasonable Scotland, which supports the status quo.

Almost 90 per cent of submissions opposed the plan, rising to 97 per cent of individuals and 99 per cent of those who said they were parents. However, this chorus of dissenting voices has not been apparent during the EHRiC’s scrutiny of the legislation. To date, 23 people have been invited to give oral evidence to the EHRiC and 15 (that’s 83 per cent) were already “fully supportive”of a smacking ban before they appeared.

The public could be forgiven for thinking some MSPs don’t much care for their views on smacking.

Mr Finnie himself seemed to imply exactly that when he remarked that “all the credible witnesses support my proposal”. His words were a snub to every concerned individual who took the time to engage with the consultation, thinking it to be an exercise in participatory democracy. If Mr Finnie and others are dismissing all critics of his Bill as “not credible” what does it say about their view of democracy?

Isn’t the purpose of a public call for evidence to inform decisions about legislation? Or is it just a tick-box exercise?

MSPs who have read the submissions will be aware of Police Scotland’s response which said removing the defence of reasonable chastisement will “result in an increase in reporting” with “potential cost/resource implications”.

The police also warned that the legislation could be interpreted as an unjustified “state intervention/interference in family life where parents and carers are ‘criminalised’ for behaviour that was previously accepted and supported by a statutory defence for generations”.

One anonymous police officer with almost 30 years experience in child protection, including in the National Child Abuse Investigation Unit, stated that he has not come across a single case which has not been dealt with effectively under the current law. He described the reasonable chastisement defence as “helpful in giving guidance” to child protection specialists, and warned that removing it would “massively impact” the workloads of police and social work departments, which are already “virtually unmanageable”.

Professor Robert Larzelere, after analysing data on smacking for decades, told MSPs that scientific research on the topic is “inadequate”, and has said that it is not “methodologically sound enough to allow for robust conclusions to be made”.

Then there are the heartfelt submissions from loving parents. Like the couple who tried exclusion techniques like the “naughty step” with their daughter but found that for her, smacking was by far the “least traumatic” method of discipline.

After reading and absorbing all of this evidence, what conclusion could MSPs possibly come to except that a smacking ban is unwanted, un-evidenced, and hugely problematic?

They must consign this proposal to the Holyrood dustbin where it belongs. To do anything else would be an affront to democracy, and a betrayal of loving parents.