‘You are living on another planet’, MSPs told

The Equalities and Human Rights Committee (EHRC) began taking oral evidence on the smacking ban Bill yesterday. This was the first in a series of sessions, with the next on 7th March. 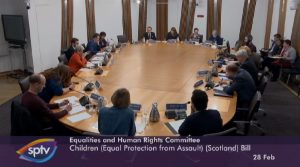 Sociologist Dr Stuart Waiton was the sole voice opposing the Bill out of the eight panellists invited by the Committee yesterday.

Dr Waiton told MSPs that they were “living on another planet” if they thought a light tap on the back of a child’s hand was a form of violence that harms them.

He pleaded with MSPs for common sense and branded the plans “patronising” and “elitist”.

“This is a tragic, depressing bill”, he said, “and yet another one which appears to represent the aloof, elitist nature of politics and professional life that treats parents in a very patronising and degraded way.”

Following a claim by a Committee member that smacking “begets violence” Dr Waiton turned to the public gallery during the proceedings to ask his daughter, who he smacked occasionally as a child: “Have you been violent recently?” 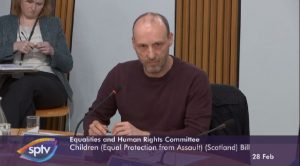 Dr Waiton accused politicians of failing to listen to public opinion, which is overwhelmingly opposed to making parental smacking a criminal offence.

Visiting the Committee, Gordon Lindhurst MSP, who is also an advocate, raised concern about Bill. He said, as currently drafted, the Bill would remove the defence of ‘reasonable chastisement’ and equate parental smacking with the common law offence of assault. This, he explained, is a very different proposal to many of the countries which smacking ban supporters often cite.