READ ITS DISMISSIVE LETTER TO OUR CAMPAIGN 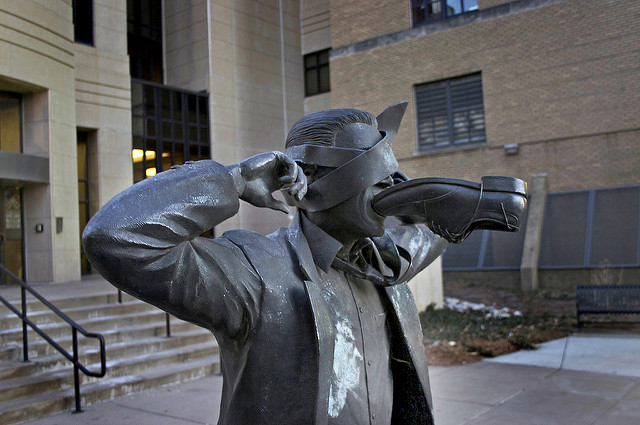 So far, the Scottish Government is paying no heed to critics of John Finnie’s smacking Bill.

For proof of this, consider this dismissive letter we received from the Government’s Justice Directorate: 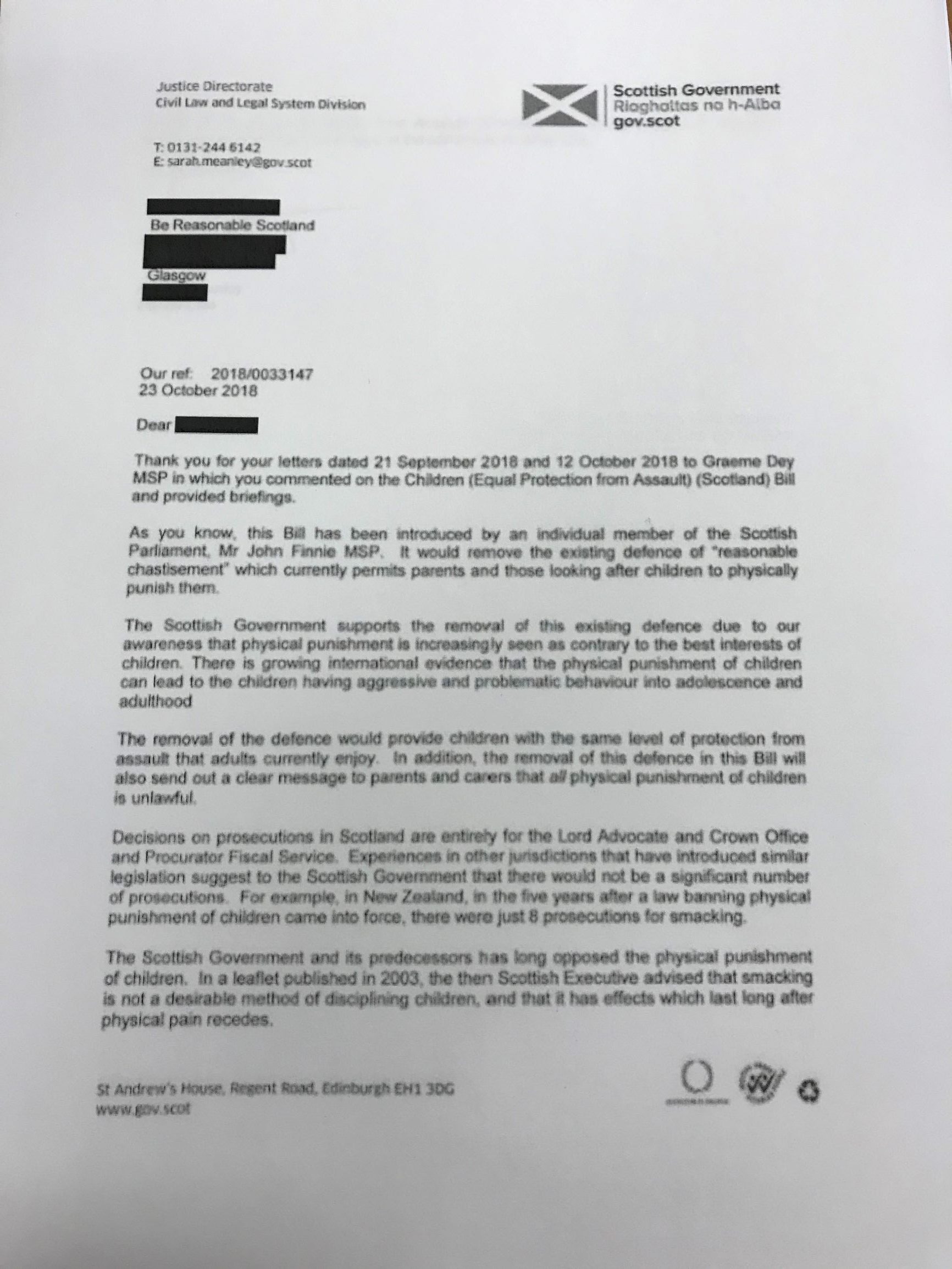 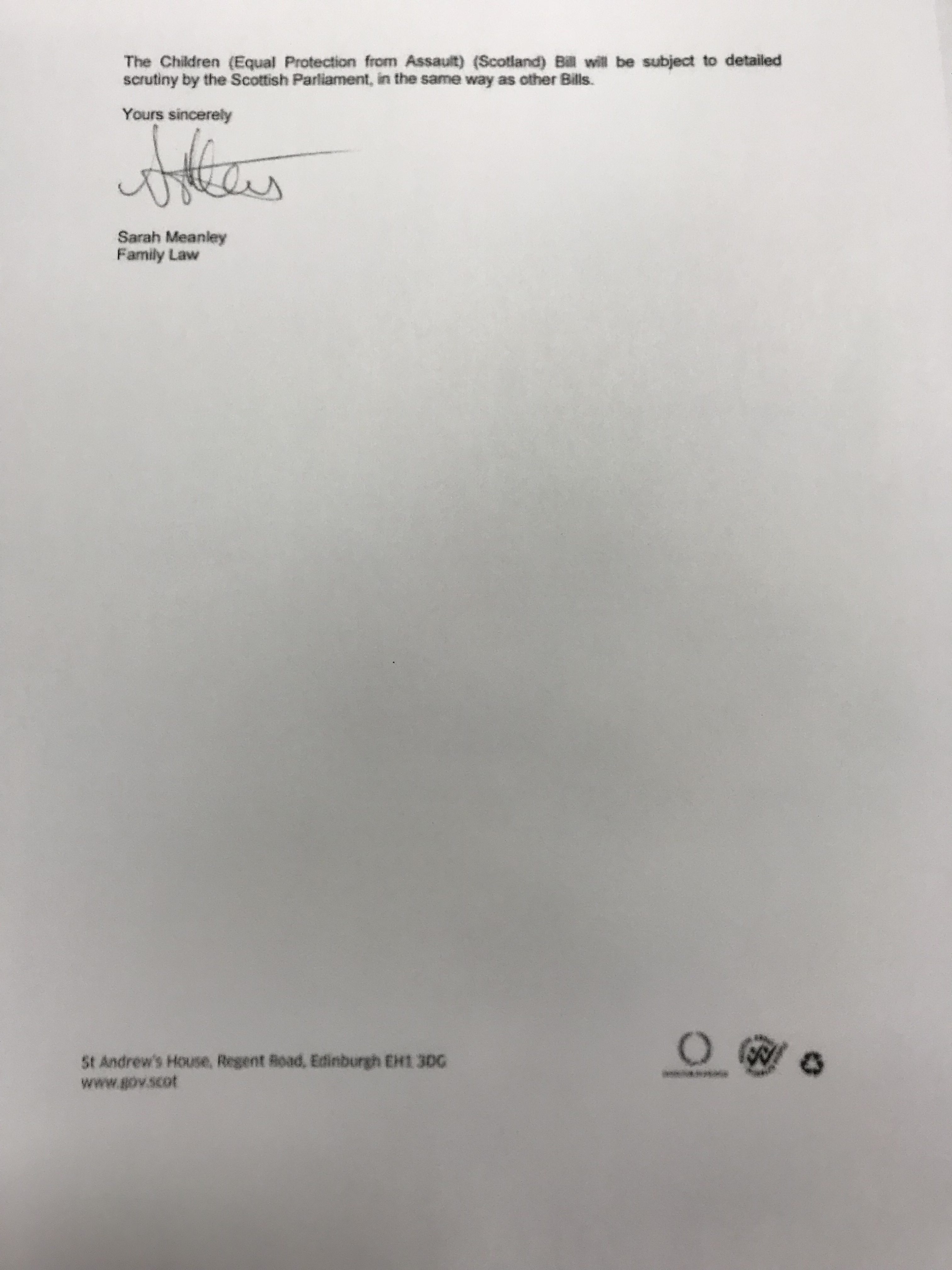 Be Reasonable had raised concerns with SNP MSP Graeme Dey about the dangers of a smacking ban. Our written correspondence cited the views of the public and the effectiveness of the current law.

Mr Dey forwarded our concerns to the Justice Directorate, who responded to us a few weeks later. Here’s a breakdown of its response and the problems with it.

It ignores the public

The first thing to say is that the Justice Directorate totally ignored the views of the Scottish electorate. Be Reasonable’s correspondence to Mr Dey cited polling by ComRes that shows widespread opposition to a smacking ban by Scottish adults.

We said: “74% do not think parental smacking of children should be a criminal offence, 75% think it should be the role of parents and guardians to decide whether or not to smack children, and 66% think it is sometimes necessary to smack a naughty child”.

This level of opposition has been frequently demonstrated by newspaper polls – one as recently as last month. The letter doesn’t even address these views.

It ignores the evidence

The letter states that there is “growing international evidence that the physical punishment of children can lead to the children having aggressive and problematic behaviour into adolescence and adulthood”. But this just isn’t true.

Earlier this year, Professor Robert Larzelere, a world-leading expert in developmental psychology in children, concluded that previous research projects on smacking are not methodologically sound enough to allow for robust conclusions to be made. He called for “developmental science to develop more rigorous techniques”.

There is no reliable evidence that mild physical discipline negatively affects children. And therefore, there is no evidential basis for banning smacking.

The Justice Directorate letter cites “Experiences in other jurisdictions that have introduced similar legislation”, including New Zealand, and claims that prosecutions under a smacking ban would be few and far between. This statement fails to take account of serious concerns by groups within New Zealand who have been seeing the effects of its ban first hand.

In February this year, public law specialists Chen Palmer concluded that banning smacking has criminalised ordinary, loving parents – despite the assurances of politicians. A report by the firm lists several examples including one parent who was prosecuted for prodding her foster son with a pen, and a father who lost contact with both of his sons despite the fact his conviction was overturned.

The BBC recently interviewed a Norwegian mother who was arrested for smacking. She said she had intervened to stop her son from biting a sibling, but her explanation was rejected and her four youngest children were taken into care.

If all this is happening abroad, why on earth would the Government risk these scenarios playing out in Scotland?

It misrepresents the current law

The Directorate states that the removal of ‘reasonable chastisement’ would “provide children with the same level of protection from assault that adults currently enjoy”. This line is plucked straight from Finnie’s Bill and it demonstrates a serious misrepresentation of the current law.

At present, the law ensures that parents will not be prosecuted for using light, reasonable discipline. At the same time, children are protected from harm. Any smack that leaves more than a temporary reddening of the skin is already illegal. The use of any implement is illegal. A smack aimed at the head is illegal. Scotland has the clearest law in the UK.

Proponents of Finnie’s Bill imply that the reasonable chastisement defence allows parents to wallop their children with impunity. This isn’t true and removing the defence will do nothing to protect kids. The Government should see this claim for what it is – virtue signalling.

It glosses over the Government’s past statements

The letter claims that the “Scottish Government and its predecessors has long opposed the physical punishment of children”. Really? Our correspondence pointed out that as recently as 2017, Ministers said they did not believe a smacking ban was “appropriate or effective”. In 2002, when similar legislation was proposed, the SNP was at the vanguard of opposition.

Why has the Government changed its tune? It appears that it is seeking political capital with the Greens. But is it prepared to do this whilst losing the confidence of the Scottish people?

And it fails to recognise bias on the Equalities Committee

Finally, the letter claims that Finnie’s Bill will be “subject to detailed scrutiny by the Scottish Parliament, in the same way as other Bills”. We feel this is somewhat unlikely given that the committee examining the legislation is stacked 5 to 7 in favour of it, and headed up by John Finnie’s own daughter Ruth Maguire MSP. In any other context, this would be considered an unacceptable level of bias.

Overall, we’re very disappointed by this response. The Government cannot plug its ears to these concerns. And it would certainly do well to listen to the public.

Will it really take the introduction of a bad law, and the suffering of Scottish families, for our leaders to reign this in?